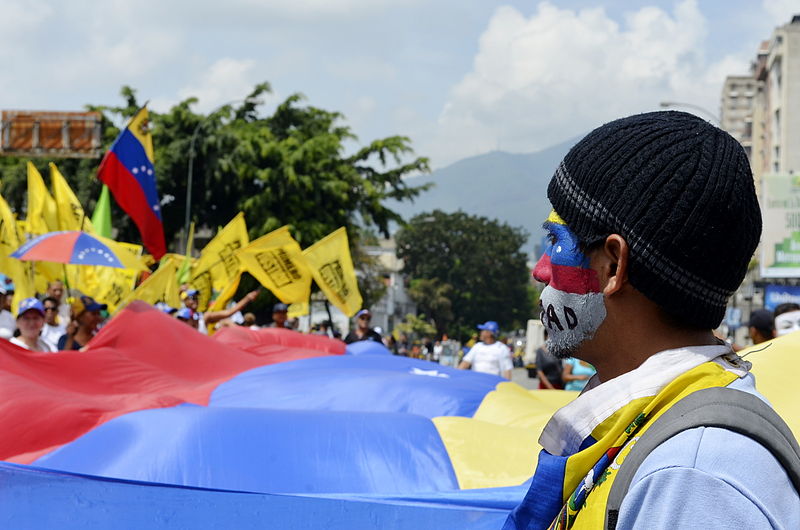 Under the leadership of Maduro, Venezuela has fallen into an economic crisis. The Pharmaceutical Federation of Venezuela states that the country does not have 80 percent of essential medical supplies. The total number of households in poverty has gone up from 73 percent to 81.8 percent from 2015 to 2016. Of those households living in poverty the proportion who live in extreme poverty has increased from 23 percent to 51 percent from 2014 to 2016. 72.7 percent of Venezuelans have lost weight in the last year, among whom the average weight loss was 8.7 kilograms. Admittedly the organization that produces these statistics does receive some of its funding from USAID, an organization with a history of providing funds to opposition groups in Venezuela. However, this is just one of many organizations that donate to the NGO, and considering the fact the government has not published any malnutrition statistics since 2007, their data is the most credible available. Inflation for this year is projected to exceed 350 percent. These are just a few of the statistics that present the dire reality of the situation in Venezuela.

Much of the crisis can be attributed a collapse in oil prices, which coincided with the death of former President Hugo Chavez. However Venezuela’s reliance on oil is due to long term mismanagement of funds by the Chavez and subsequent Maduro government. Admittedly low oil prices have caused economic strife in Venezuela for other non-socialist governments in the past, but the country’s external income from oil has actually increased since 1997 from 67 percent to 95 percent of total revenue. Moreover, corruption remains prevalent in the state-run oil company, PDVSA, which oversees the vast majority of oil production in Venezuela. In 2015, the PDVSA awarded a 4.5 billion dollar contract for production in the Orinoco Belt to the Colombian trucking and trading company Trenaco. This was despite the fact that Trenaco had no major experience in the industry, and the deal collapsed when international companies pulled out, with anonymous sources from one organization informing Reuters, “There were red flags everywhere.” In December 2015 two prominent Venezuelan businessmen were detained by U.S. authorities and admitted guilt in bribing officials to obtain PDVSA contracts. Under Chavez and Maduro, the country’s reliance on oil has increased while corruption has contributed to declining oil production which has exacerbated an already critical situation.

Maduro has presented the Constituent Assembly as a way to solve the crisis in Venezuela. However, given the theoretical and purported function of such an assembly, it is hard to understand how it will offer any relief to the Venezuelan people. In theory, the assembly exists simply to amend the national constitution. If Maduro intends to use the assembly for this purpose, then he can do so and the final proposition will be put to the people in the form of a referendum. However, this will be a slow process. When Chavez re-wrote the constitution in 1999, the process took eight months. If he uses the body as a tool to remake the economy, then he will be acting in a highly divisive and undemocratic manner.

Rather tellingly, the assembly has yet to debate any significant issues of constitutional reform, and instead they have used it as a tool to remove political opponents. The Constituent Assembly has paramount power over all other sections of government as stipulated in article 347 of the Venezuelan Constitution. To those ends the assembly has already removed Attorney General Luisa Ortega from her post for failing to prosecute violent sectors of the opposition, and has replaced her with Ombudsman Tarek William Saab, a Maduro ally. There is precedence for the Constituent Assembly being used to supersede the National Assembly, as Chavez dissolved the legislature in 1999.  On August 18, Maduro did the same, stripping the opposition-controlled National Assembly of almost all of its powers after it failed to heed a summons by the Constituent Assembly. To use the assembly as a tool to remove opponents and replace them with loyalists, and rule by decree in practice excludes all opposition voices from governance in Venezuela, solidifying Maduro’s control over the nation.

If the Constituent Assembly is to be used to assist the economy in any way then it will be through ruling by decree, not constitutional reform. So, to be very clear, it is not a viable position to claim the Constituent Assembly is a tool to aid the economy and a tool to solve the political crisis. Either the assembly serves its purpose and rewrites the constitution, something that will provide no immediate relief to the Venezuelan people, or it attempts to solve the crisis by decree, going over all checks and balances in Venezuela’s democracy and completely excluding the vast majority of anti-Maduro voices.

Venezuela is currently a country in crisis. Late ex-president Chavez failed to diversify the economy, and Maduro is now failing to alleviate the situation. The elections for the Constituent Assembly face serious allegations of fraud, but the assembly was convened regardless, before the National Electoral Council (CNE) had released the detailed vote tallies. Such actions by Maduro only serve to harden the stance of his opponents: that he is seeking to establish a dictatorship in Venezuela, and reduces the likelihood of a peaceful solution. It remains imperative to resist intervention by the United States and the Almagro-bloc of the Organization of American States, who both oppose Maduro without consideration of the intentions of elements of the opposition, and who ignore constitutional power grabs when enacted by the neoliberal Michel Temer of Brazil. However, it is clear that many of the gains of the Bolivarian revolution are slipping away, and Maduro’s current actions serve far more to solidify his power, than they do to serve the Venezuelan people.

Jack Pannell is pursuing a B.A. in History at the University of Warwick.